The emerald ash borer and Asian long-horned beetle are two of the latest pests to threaten forests in the Northeast, and beyond.

The emerald ash borer, a beetle that feeds only on ash trees, is the latest addition to New York's fauna. The beetle's impacts to Detroit, Michigan, and the upper Midwest already are devastating. Virtually all ash trees in Detroit and surrounding suburbs have been killed, and millions of ash trees are dead across the upper Midwest and adjacent Ontario. Spot outbreaks have occurred in numerous other states, now including New York, where it was detected this past June in a western region of the state famous for its ash baseball bats, a favorite of major league baseball. The emerald ash borer is yet to be seen in New Jersey, but, sadly, that is considered inevitable.

New York and New Jersey have four native species of ash-green, white, black, and pumpkin. Estimated at well over half a billion trees strong in New York, ash is found throughout the state. Ash trees are prevalent along streams and wetlands, as well as backyards and city streets, and the impact of the emerald ash borer-it is considered to be unstoppable-is likely to severely alter important wildlife and human habitats.

Another non-native beetle, the Asian long-horned beetle (ALB), whose life-cycle and appetite includes a long list of our native deciduous tree species, poses a potentially greater threat to our forests. It is, however, characterized as a "lazy flyer," giving scientists hope that, with vigilance and proper action, its spread can be checked and the beetle eradicated.

As the name indicates, this beetle is native to eastern Asia. ALB was first documented in 1996 in Brooklyn, where it is believed it entered the United States in the late 1980s via wood pallets holding pipe shipped from China. Through separate introductions, this forest pest established itself near the ports of New York, Chicago, and Toronto. In 2008, it was then also found in Worcester, Massachusetts, where it likely went undetected for 10+ years. 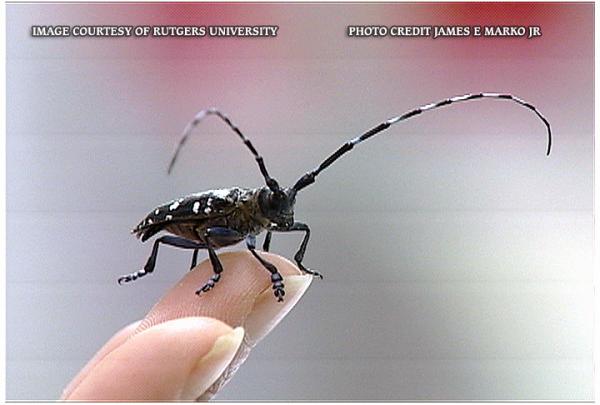 The Asian long-horned beetle lays its eggs on maple, poplar, willow, and many other deciduous tree species. The larvae burrow through the wood, creating tunnels which weaken and eventually kill the tree. There will be high economic costs imposed on cities from the destruction and removal of infested hazard trees. Additional costs and lost economic opportunities would impact rural areas, particularly from fall foliage tourism, maple syrup sugarbushes, and timber, not to mention to the ecological and aesthetic impacts.

ALB is a large (up to 1.5 inches long) jet black beetle with white spots, the antenna has an alternating black and white color, and it emerges from bullet-sized holes of various deciduous trees. There are a few look-a-likes. If you think you see one, please take a digital image and/or capture the beetle and place it in a freezer bag for later confirmation. (The University of Vermont has produced an excellent online identification resource http://www.uvm.edu/albeetle/). If you think you have found the Asian long-horned beetle, please call 877-STOP-ALB.

So what can we do to slow the spread of these beetles and how can we stop future infestations?

First and foremost: don't move firewood! While these pests can spread half a mile or more each year, we accelerate the spread inadvertently by moving infected live trees, logs, pallets, or firewood longer distances. New York's Dept. of Environmental Conservation regulations now limit the movement of firewood to no more than 50 miles. These regulations are vital to protecting the trees in our backyards as well as the treasured forests of the Catskills and Adirondacks. Instead, we should remember to support local businesses and "Buy It Where You Burn It."

You can also keep an eye out for forest pests in your own community. Most of the known infestations have been found by everyday people curious about the world around them. Educate yourself about the signs of foreign pests like Asian long-horned beetle, emerald ash borer, hemlock woolly adelgid, and sudden oak death.

Our efforts are probably too little to late for the likes of hemlock woolly adelgid and the emerald ash borer, but the vast majority of forest ecologists believe we still do have an opportunity to eradicate the Asian long-horned beetle. Your assistance in finding this beetle and cooperation with eradication efforts are critical if this effort is to be successful.

In the long term, the best solution is to prevent invasive species from arriving in the first place. International trade is necessary for a healthy economy. Unfortunately, many invasive insects enter this country via shipping containers, crates, and pallets. Properly overseeing and regulating imports-in particular wood packaging-is key to preventing these unwanted hitchhikers. New international trade rules implemented in 2007 should have closed this specific pathway, but we need to stay watchful to ensure the rules are successful and sufficient.

If we do not get ahead of this invasive species problem, we will continue to suffer from significant environmental and economic harm. By properly implementing new policies designed to address the threats of invasive species and taking individual action such as not moving firewood, we can minimize the threat of pests like the Asian long-horned beetle.

Troy Weldy is the Director of Ecological Management for The Nature Conservancy- New York.

Follow these links to learn more about forest pests and the role of firewood in spreading them.